Architecture of the Church


The building itself symbolizes Eden. In Bible (in Genesis) Eden is a paradise garden and the place where human beings initially inhabited. Four towers that create a circle around the building symbolize four rivers: The Pison, the Gihon, the Tigris and the Euphrates flowing from Eden.

The church located in the center of the building is a symbol of paradise and the house of God. It is a temple of infinite love and kindness as well as symbol of our Savor Jesus Christ.

Two front towers are several meters taller than back ones and if observing the building from one side it resembles a figure of a lion. The bas-reliefs of a lion are often found in architecture if ancient Mesopotamia.

The image of a lion symbolizes one of the evangelists Mark and is also considered as a symbol of Son of God himself as he is endowed with features such as contemplation, hermitage and solitude. A lion is the symbol of royalty, courage, brevity, supreme power and nobility. A lion is often interpreted as one of the animals that symbolize sides of the world. Images of lions depicted as guards are common in Egypt, Assyria and Babylon. Like a Babylonian Lion that protects human and at the same time shows his power over him, Son of God protects his flock from all evils, putting mankind under the power of kindness and love of God. 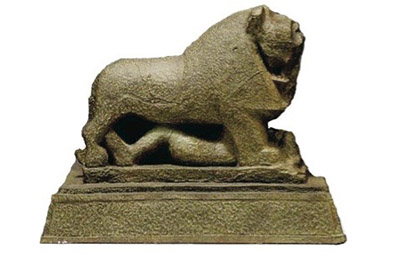 Towers as well as the whole building are crowned by the stepped element that is typical to fortifications in Assyria and Babylon. The element has been a symbol of power and dignity since ancient times. Majority of the windows are narrow and oblong. This creates the effect of monolithic building. The building itself is painted in fawn color and symbolizes the color of desert and the homeland of our ancestors. There are three circular windows on each of the front towers and there is the seventh window in the form of the circle on the front of the building. 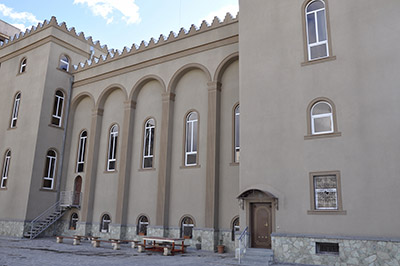 The circle by itself is a universal symbol of integrity, infinity and initial perfection. Roundness is considered sacred as it is the most natural shape and contains the meaning of infinity and eternity. A circle is a form that includes space and reflects absence of time as well as absence of beginning and end. The circle also means return, cycling movement and dynamism. The circle is a symbol of high power, divinity, the center of which is everywhere and in four sides of the world. Speaking about number seven, it should be mentioned that the system of sacred numbers formed in ancient culture was partly assimilated and reinterpreted. It received a new mystical and symbolic content in Christian teaching.

The most essential and key numbers that were famous from Holy Scriptures started to be used. One of such numbers is seven. This number is mentioned in the Old and New Testament about 700 times. Number seven has the meaning of sacraments related to the spiritual side. It is considered as a mysterious, divine power in nature. It also expresses a general routine (seven days of the week) and is connected with Christian ethics (seven virtues). Therefore, it depicts the highest degree of cognition of the divine mystery and achievement of spiritual perfection. Seven is a symbol of man's mystical nature and his harmonious attitude to the world. It symbolizes seven doors of a man: two eyes, two ears, two nostrils and a mouth. In addition, seven is the number of universe and the macrocosm that means completeness, totality and perfection.

The building itself is a multifunctional. There are rooms in each tower where Sunday school students take classes. The classes are equipped for the lessons in various subjects. There is a dining room, banquet room, a foyer and a theatre hall for different celebrations and events. There is a church hall in the center of the building and there are living accommodations on the upper floor of the towers. The building represents a kind of architectural, religious and cultural mixture of ancient eastern civilization with Christian Mesopotamia, which is clearly observed in the symbolism of the church hall.